A brand new poster for the next installment of the Star Wars saga, Star Wars: The Last Jedi, has been revealed. 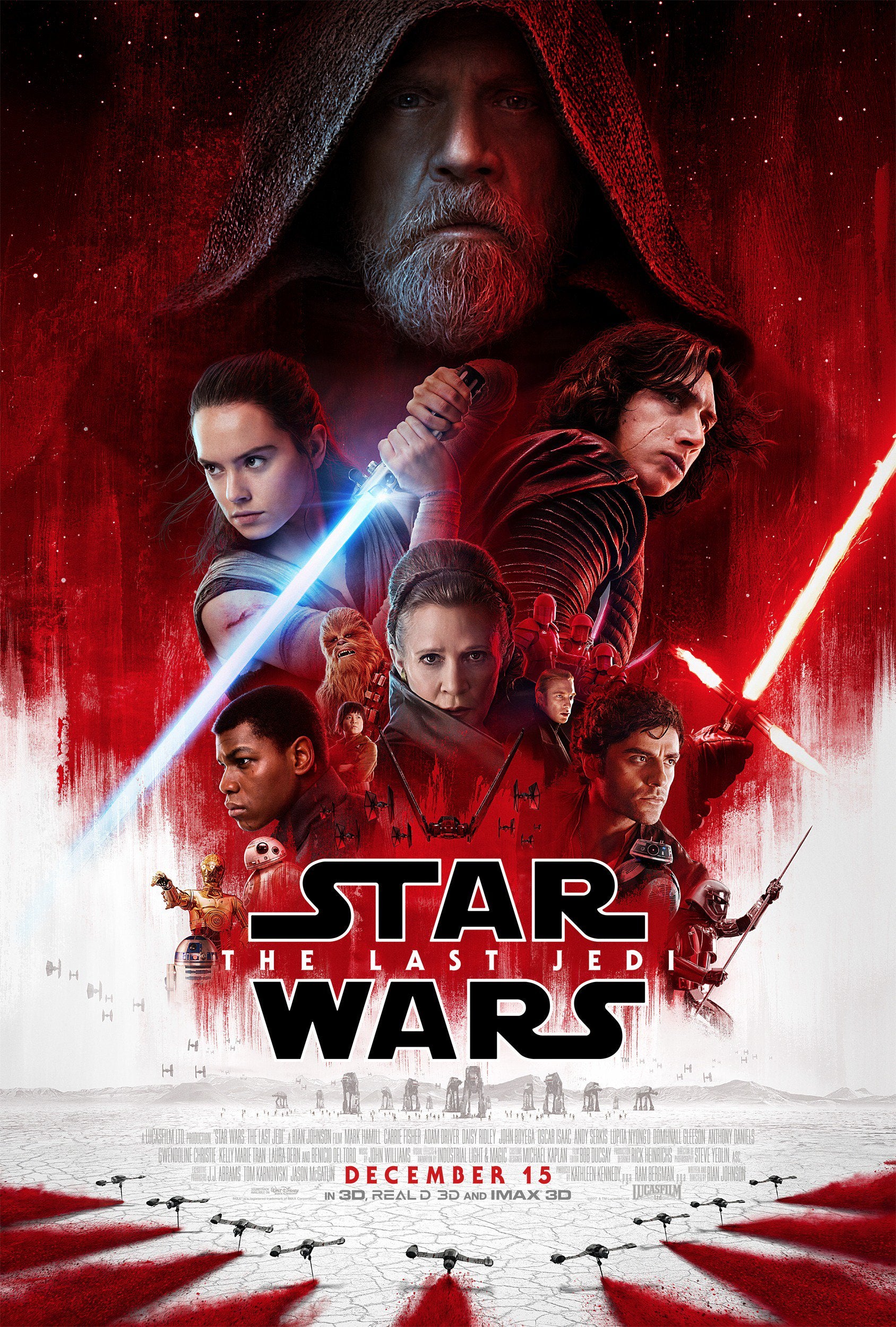 The official Star Wars Twitter account has released the new poster for The Last Jedi ahead of tonight’s new trailer reveal, which director Rian Johnson warns some fans might want to avoid.

Warning: Full spoilers for the episode below.

Of the four current Arrowverse shows, Supergirl is the one whose return fills me with the least amount of enthusiasm this season. For all that Season 2 did to improve on the formula, it still fell well short when it came to crafting compelling villains or delivering proper payoff to a season-long conflict. The good news is that Supergirl’s Season 2 finale hit a lot of strong emotional notes as Kara found herself forced to sacrifice her relationship with Mon-El for the sake of her city. The series is still leaning heavily on the fallout of that big sacrifice as it begins its third season. The bad news is that it’s unclear how much the show will be able to improve on its problem areas this year.

During Monday Night Football, the newest trailer for Star Wars: The Last Jedi aired, and as director Rian Johnson stated, it contained some spoilers for the film. But after the trailer aired, he tweeted that everyone should watch it. We’re taking a look at every major moment from the new trailer and breaking it all down to see what we can learn about the story for the December 15 film.

If you can’t wait to see the movie, you can preorder your tickets for the film right now.

Warning: Possible spoilers for the film coming up.

The trailer opens up with Kylo Ren looking at a First Order factory. Weapons are being built for his army. Supreme Leader Snoke says, “When I found you, I saw raw, untamed power.”

A few old AT-ATs are surrounded by the First Order’s AT-M6, which are incredibly massive. This is the front line of the Battle of Crait, a massive fight on a small mineral mining planet.

Kylo is leading some First Order soldiers in what seems to be a mine. Could he be on the front line of this invasion?

Snoke continues, “And beyond that, something truly special.” Kylo Ren picks up his lightsaber and there’s a quick cut to black. We’re led to believe that Snoke is talking about Kylo during these moments, but things become a bit more ambiguous as the trailer moves forward.

Rey powers up her lightsaber, as she’s still on the island where we last saw her during The Force Awakens. Her training has begun with Luke Skywalker. During the upcoming scenes, Rey says, “Something inside me has always been there.” She’s always had an inkling that she was destined for something greater.

Rey is training on Ahch-To, where Luke has been in exile, seeking the first Jedi Temple. She’s now on her own journey on the planet, as she traverses the a foggy area.

A single beam pours onto a flat surface in a darkened room. Everything about this trailer is pointing to the fact that Ahch-To could be the home of the first Jedi Temple. Rey peers down at the light during the next shot, while she says, “That I was awake. That I need help.” There is lots of mysterious imagery during Rey’s scenes.

There’s another shot of Rey learning to use the lightsaber, stopping herself mid-swing. By the look of the rock, she’s been learning this basic technique for sometime.

Rey has some tremendous force powers while training; she can crack the earth and make stones float–which we’ve seen in previous trailers. What is new is the look on Luke’s face while this is happening, and he looks terrified. “I’ve seen this raw strength only once before,” says Luke. “It didn’t scare me enough then. It does now.”

There is a quick flashback while Luke talks to Rey. Luke’s robotic hand busts out of the flaming debris. This could be the Knights of Ren’s doing, when Luke decided to go into hiding after one of his students, Ben Solo, became influenced by Snoke and destroyed the other Jedi in training to become a Knight himself.

Kylo says, “Let the past die,” as he smashes his helmet into the wall. Will this be a turn to the light side of the character or is this just Kylo moving on to be his own person and not just another member of the Knights of Ren?

Kylo’s ship–along with a couple of First Order Tie Fighters–is involved in a battle against the Resistance. “Kill it,” Kylo says. “If you have to.”

There is a shot of General Leia looking onward. Apparently, Kylo plans on killing both of his parents. The score for the trailer is intense and loud as the tension builds.

Kylo’s ship targets the capital ship that we’re led to believe his mother, Leia Organa, is on. “That’s the only way to become what you were meant to be,” he says.

Kylo’s thumb hovers over the button to fire for a moment, and it seems like he’s starting to press it down.

Kylo hasn’t fired yet, and he looks mortified. He may not go through with it. Once again, this trailer shows another moment where we can see that there’s mercy and maybe even some good still left within him.

The Millennium Falcon is being chased by some Tie Fighters, but who’s behind the helm this time?

Chewbacca is flying the ship, and he lets out a classic roar, which is quickly followed by a Porg doing the same thing. Interestingly enough, Porgs are sea-birds found on Ahch-To–where Rey is training with Luke–and Chewie could use the company after losing his longtime friend Han Solo.

Poe Dameron is on a transport ship as a battle rages around him in space. “We have a spark,” he says.

Poe is back in action in a new X-Wing that has an extra engine on it, flying above a First Order Dreadnought. He continues, “That will light the fire that will burn the First Order down.”

Captain Phasma is back, with her staff. Hopefully, she’ll have more screentime in this movie.

Finn’s back, but this time he’s not in First Order Stormtrooper gear. He’s in an Imperial Officer’s uniform.

Finn and his former boss Captain Phasma have an electrifying fight. It seems as though the Resistance found where the First Order was manufacturing their weaponry and have invaded it.

This just looks too awesome to not mention.

For a brief moment, BB8 appears. The droid has been shocked in space and is shaking it off.

“This is not going to go the way you think,” Luke says while rain hits his face. Who is he talking to? Did Kylo find him or is he saying this to Rey, who is leaving him?

A crystal fox is being let into a mining outpost or base of sorts on Crait. The doors on the base are slowly shutting.

Finn, in his Imperial Officer uniform, walks in front of a Trooper. There’s nothing that leads us to believe he’s been captured. So maybe he’s working undercover. Obviously, this all takes place before his battle with Phasma.

We finally see Supreme Leader Snoke up close and personal, and he’s using the Force on someone. “Fulfill your destiny,” he says.

The person he’s manipulating with the Force is Rey. She seems as she’s being broken down by Snoke. Is this an attempt to get her to join a new Knights of Ren?

“I need someone to show me my place in all this,” Rey says.

The next shot is Kylo, who offers her a hand. However, there is fire falling from the sky behind him and the color of the lighting doesn’t exactly match up. Could this be misdirection from Disney or are Kylo and Rey going to work together, and what’s their endgame? Will it be for Snoke or for the Resistance?

Only a day ago, Star Wars: The Last Jedi director Rian Johnson told fans on Twitter that it’s a good idea to avoid the film’s brand-new trailer “if you want to come in clean.” But now that the trailer is live, he’s had a change of heart, declaring that everyone should go watch the video.

On Twitter, Johnson made his feelings known in no uncertain terms. “Forget everything I said and watch it watch it watch it,” he wrote. So, if you want to follow the director’s advice, you can check out the new Last Jedi trailer in the embed above.

Of course, trailers for anything will always spoil something. So if you really want to know nothing about the film before seeing it in theaters, you’ll still want to avoid the trailer. For everyone else, though, it’s a tantalizing but fun glimpse of what’s likely to be the year’s biggest movie.

The Last Jedi‘s cast includes Daisy Ridley, John Boyega, Mark Hamill, Adam Driver, Carrie Fisher, Oscar Isaac, Domhnall Gleeson, Anthony Daniels, and Andy Serkis. Although Fisher passed away in December 2016, Princess Leia will nonetheless appear in the film; it’ll be the character’s final apperance, as she will not be resurrected for Episode IX. The film is due out on December 15.

It’s been a while since Middle-earth: Shadow of Mordor came out–three years, in fact–so it’s understandable if you’ve forgotten some of the events of the game. In a new trailer, an orc named Bruz the Chopper gives you all the info you need to jump into Shadow of Mordor’s upcoming sequel, Shadow of War.

Bruz provides a quick overview of the original game’s story, followed by a description of Shadow of Mordor’s world and features. He’s a memorable narrator, too, with a pretty irreverent and blunt sense of humor. The video actually looks and sounds a bit like other YouTube story breakdowns. You can check it out above.

If you want a slightly more in-depth look at Shadow of Mordor’s story (and one with less orc slang), you can check out our recap here. Shadow of War’s narrative stars Talion and Celebrimbor, the main characters from the original game. It also takes some significant creative liberties from the Lord of the Rings canon, such as portraying the spider Shelob as a woman. You can read GameSpot’s recent interview with lead narrative designer Tony Elias about these story changes here.

Shadow of War launches tomorrow, October 10. In our 7/10 review, critic Justin Haywald wrote, “It tries to be larger than its predecessor, there are more abilities, more weapons, more Orcs, yet it leaves you wanting less. But at its core, it’s a fun experience with brilliant moments that provide fascinating insight into some of the untold stories of Middle-earth. I just wish it had known when to stop.”

Here’s what you need to know to start your day.

The anarchists, free marketeers and social democrats united in a quest for sovereignty agree on little else, which could become a problem.

Disney and LucasFilm have unleashed the hugely-anticipated first full-length trailer for Star Wars: The Last Jedi today, and alongside that a string of high-res stills directly from it.

You can check them all out in the gallery below.

Our initial thoughts on the trailer, which seems packed to the brim with misdirection, can be found and discussed here.

The arrival of the trailer follows the unveiling of a new theatrical poster for the film, as well as confirmation advance tickets have gone on sale in the US. Tickets are also on sale in Australia and, according to Star Wars UK on Twitter, will be available in just a few hours in the United Kingdom (7AM BST)

A man will almost certainly become the country’s next leader, and women are worried that their newfound gains will be lost.